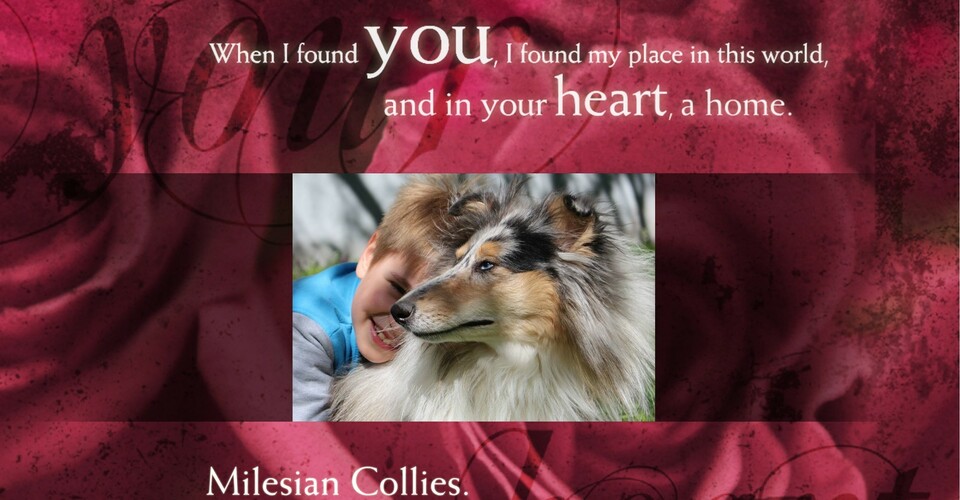 CEA is an inherited eye disease common to the Collie breeds including the Rough Collie.
In most cases the disease in inherited in a very mild form, so mild in fact that it cannot be detected
by clinical examination, and in this mild form it is not believed to affect vision at all. CEA is not progressive, generally speaking what we see in an 8 week old puppy will not worsen with age, except in rare cases where large coloboma are present that can later cause retinal detachment.  In 75% of cases where CEA is diagnosed, the degree of the disease is ‘mild’ and the dog will lead a normal life. A percentage of those diagnosed as ‘affected’ will have one or more small coloboma, tiny holes or dents in or near the optic disc. Provided the coloboma is small, sight will not be affected to any huge degree and once again the dog will lead a normal life.


We need to remember that dogs evolved to hunt prey at dawn and are not nearly as dependent on vision as are humans. Both scent and hearing are equally involved and it can be said that a dog is only 33% dependent on sight.

Generally speaking therefore a small coloboma will not greatly detract from the dog’s overall quality of life. However in a very small percentage of cases that are diagnosed with CEA, a large coloboma and or haemorrhage is present, and in these instances it can lead to detached retina. If the dog has a detached retina this will cause blindness in the affected eye.  Occasionally a puppy is born with severe impairment of vision in both eyes and it is possible to produce an entire litter thus affected, for this reason all puppies should be eye tested between the age of 6-8 weeks.

Many puppies diagnosed age 6-12 weeks as ‘mildly affected’ will appear to be completely free of CEA if tested when older. This phenomenon is known as CEA ‘go-normal’ although it must be remembered that from a genetic viewpoint, such dogs ARE affected.

For many years breeders have tried to eliminate CEA or at least reduce the incidence and severity.

However all efforts have failed and the occurrence and severity of CEA are much the same now as they were when the condition was first diagnosed in the breed. This has confused those breeders with an understanding of basic genetics. CEA is inherited as an autosomal recessive trait. Both parents must carry at least one copy of the defective gene for the offspring to be affected. If those collies diagnosed CEA clear under clinical examination at 6-8 weeks are actually ‘clear’ the following should be applicable.

First of all I shall be referring to CEA non carriers as +/+, CEA clear/carrier as +/-, and affected as -/-. We need to remember that ‘mildly affected’ shares exactly the same gene responsible for producing ‘severely affected’ puppies although it is believed a dog inherits certain 'modifier' genes separately which do affect the severity of the diseases. Even so, CEA is one gene that displays itself with varying severity in individual puppies and coloboma are part and parcel of the SAME gene.

The question for those breeders genuinely interested has been...why have no CEA non carriers been found amongst the UK Collie population?, if the puppies clinically diagnosed as clear are truly either +/+ or +/- it would be genetically impossible NOT to produce a percentage of non carriers. So we must ask ourselves where are these non carrier Collies? Surely they can’t ALL be hidden from the breeding gene pool and in pet homes!

In recent years a new form of diagnosis has been developed, the canine genome has been mapped and a DNA marker found for CEA. At long last an answer to our question is being revealed. Several UK bred Collies living both here in the UK and also on the European continent have now been DNA tested.

To my present knowledge every UK bred Collie tested by DNA analysis has been diagnosed as ‘affected’ and not a single collie has been diagnosed +/- or +/+. The Collies used in these tests had all been diagnosed at 6-8 weeks by clinical analysis as CLEAR....but in reality they are AFFECTED. This fully explains why breeders have been unable to make drastic improvements in this area in the UK, and it is extremely possible we have NO ‘true’ clear eye gene in the UK Rough Collie population. Clinical examination has proven tobe untrustworthy, although severity of the condition can be discovered by this method.

Indeed, world wide it is believed that as few as 5% of Rough Collies are CEA non carrier (+/+) with perhaps 15% worldwide being clear/carrier (+/-) and as I have already said, No true clears have yet to be discovered in the UK...that is until now!  We recently imported two CEA non carrier (+/+) dogs from Canada and are integrating them into the gene pool here at Wicani, every puppy sired by these boys is +/- (by DNA) making collie history here in the UK, as these are the only UK bred puppies presently known to carry the TRUE clear eye gene!  A third non carrier Collie has been imported to the Strobroy kennel in Scotland.

We plan to import several more Collies to further enhance our gene pool, increasing genetic diversity whilst introducing a true DNA marked CEA free gene. I feel humbled and honored to be in a position whereby I am able help the breed in this way. I am in no way criticizing my fellow breeders that have made different decisions and prioritized differently in their breeding programs, and as I have already said, a collie affected with CEA seldom shows signs of impaired vision and many will appear to be clear of this condition in clinical examination. Another point worth remembering is that the Breed has lived with CEA since its beginnings, however, on a personal note I wish to begin the eradication of any defective gene wherever possible, and if I can prevent the birth of one blind puppy, I feel my task will have proven itself worthwhile.

For those interested I use in my home pages the following terminology:

NORMAL EYED NON CARRIER (+/+): A Collie that is not carrying the gene for CEA and cannot pass an affected gene to their offspring (also referred to as N/E N/C)

NORMAL EYED (+/-): A Collie with the true clear eye gene but carrying an ‘affected’ gene. This Collie can pass to its offspring either a true clear gene or an affected gene. (also referred to as N/E)

CLINICALLY CLEAR (-/-): A Collie that has been diagnosed ‘clear’ by clinical examination, but if DNA tested would prove to be ‘affected’ this Collie can only pass an affected gene to its offspring, even though he/she ‘appears’ to be clear themselves and even if the offspring ‘appear’ to be clear by clinical examination.(also referred to as C/free)

AFFECTED (-/-): A Collie who appears ‘affected’ (whether mild or severe) on clinical examination.

REMEMBER, the only TRUE way to check a Collies eye status is by DNA analysis.

Many thanks to Angela Harvey for this excellent explanation about CEA. The breeding of Milesian Collies is based on this long term experience and the famous breeding kennel of WICANI.
We breed Collies with the goal to be CEA free and from extra-ordinary beauty.

More information about CEA would will find here: